We are seeing a massive HMRC IR35 own goal. According to a poll by Inni Accounts, 47% of contractors have seen companies offshore their contract work as a result of the IR35 reforms.

So, how much tax are HMRC going to get from the work that is being sent abroad. It looks as if much of the contracting profession is going to be decimated after April 6th 2020.

HMRC reckon they will make £3 billion over the next 4 years which is around £750m a year. That is the equivalent of less than a tenth of a penny on income tax. It’s a trifling sum in tax terms. Yet, to get it, the Government and HMRC are prepared to destroy the flexible workforce that the Government has praised so highly.

How Will the HMRC IR35 own goal affect UK companies

Britain’s top companies are currently operating at an optimal level in terms of the mix between permanent employees and contractors.

Now, because of interference in the marketplace by a Conservative Government, all the UK’s top companies will be forced to work at a sub-optimal level. They will also have to deal with a much less flexible contractor workforce.

They will also be saddled by a whole load of bureaucratic Government IR35 red tape.

What did HMRC and the Treasury expect contractors to do

I’m sure that HMRC and the Treasury when making their calculations penciled in that contractors would meekly accept their fate and move over to PAYE. They would then pay maybe £20,000 to £25,000 more in tax.

However, this is not what is happening.

Why will HMRC and the Treasury lose money

HMRC and the Treasury are going to lose money from:-

This is a huge HMRC IR35 own goal that the Treasury and HMRC are scoring here. They are not going to get the money they expected from the IR35 changes.

What’s more they are going to cause chaos at every major company in the land. They are also going to destroy, perhaps for good, the flexible contractors workforce.

And it is all little more than 6 weeks away. 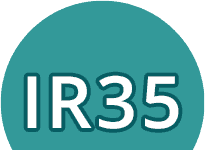